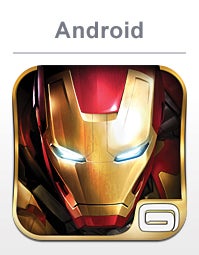 Everything you need to know about Iron Man 3: The Official Game.

Iron Man 3 is an elaborate endless runner-style game in which you star as the famous superhero featured in the third installment of the movie series.

Iron Man 3’s gameplay is based around flying over various different levels, dodging obstacles and shooting enemies as you go. There are lots of objects and power-ups to collect that can help you upgrade your suit, purchase new suits (18 in total!) and weapons, and boost your defenses.

Besides the goal of traveling as far as you can without dying, there are lots of missions in Iron Man 3 which, if completed, give you rewards such as credits and ‘ISO-8’, the game’s currency. There are even daily missions to complete which help you to piece together the story and earn more credits.

This time we need to kick M.O.D.OK. V3.0’s ass off!.
The player has to fly though a certain distance to be able to face this villain.

No comments to show.